Are you ready to tackle your TBR pile this month? Join us in November and conquer your TBR!

If you share a completed bingo in the comments below before December 1, you’ll receive 20 bonus points!

Click here to read the rules and download your Bookish bingo card below. Make sure you share your progress with us by using #BookishBingo on social media. Let us know what books you’re reading for each prompt below! When you get a bingo, shout it out here. 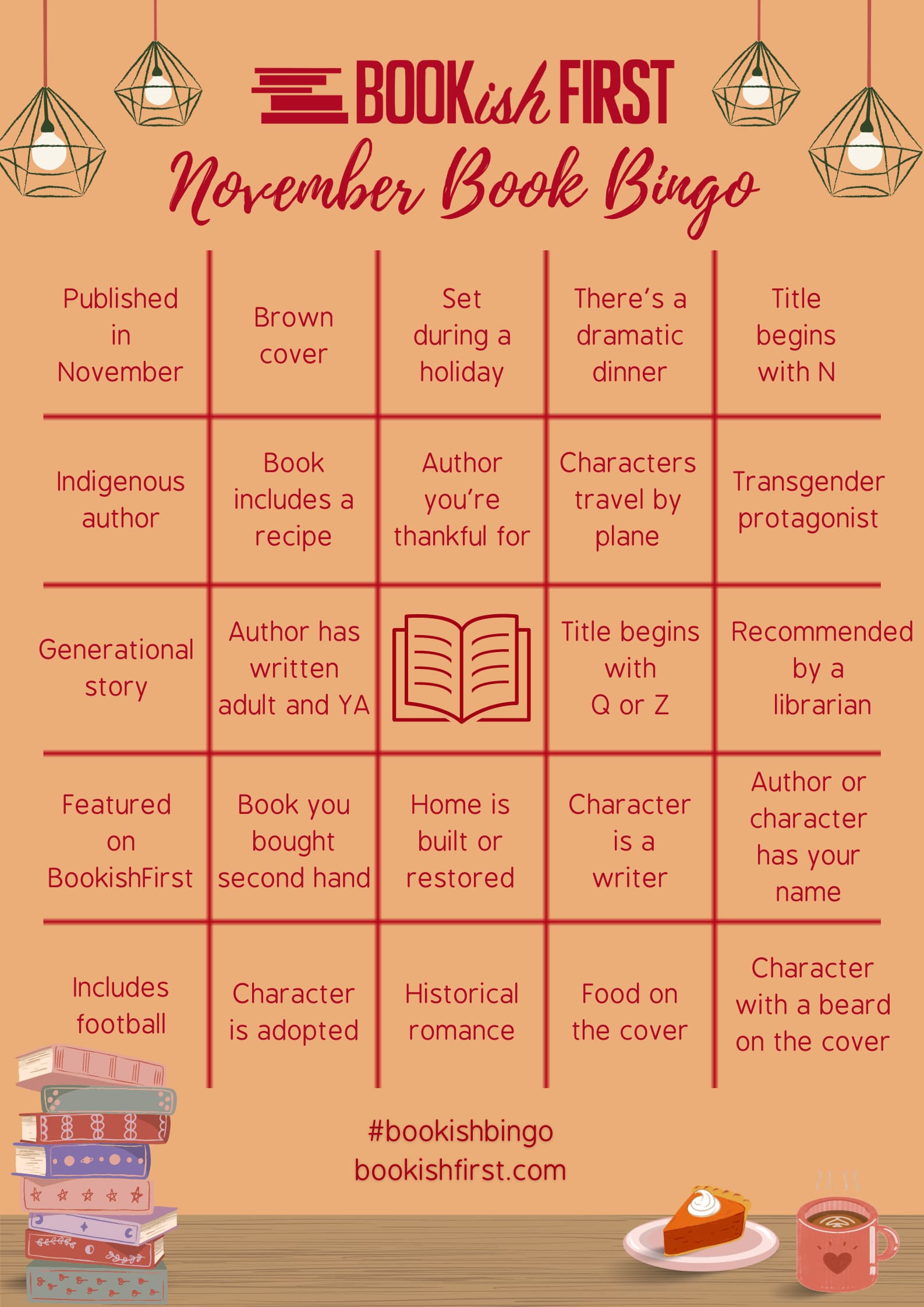 Have an idea for a future board? Share it here.

November Bookish Bingo prompts: Published in November, Brown cover, Set during a holiday, There’s a dramatic dinner, Title begins with N, Indigenous author, Book includes a recipe, Author you’re thankful for, Characters travel by plane, Transgender protagonist, Generational story, Author has written adult and YA, Free space, Title begins with Q or Z, Recommended by a librarian, Featured on BookishFirst, Book you bought second hand, Home is built or restored, Character is a writer, Author or character has your name, Includes football, Character is adopted, Historical romance, Food on the cover, Character with a beard on the cover

Hello, what is a good fall book to read for November?

Hello! I don’t own a single book that I purchased secondhand, since I exclusively read ebooks and audiobooks. What are your rules for substitutions on your bingo cards? If you don’t have any, do you have any suggestions for me for that square? Buying a secondhand book isn’t an option for me because there aren’t any used book shops where I live. Thanks in advance! 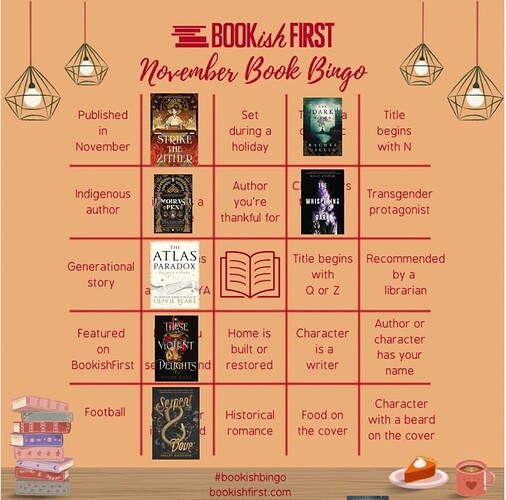 I get alot of my usedbooks from thriftbooks and betterworldbooks, they are on line. I hope this helps.

One of my favorites is midnight at the blackbird cafe by Heather Webber and another 1 that I really like is a series but it’s The Secret book in Scone society.

I’m excited to try this out. I’ll post my results if I manage to make it!

I normally just try to plan around the squares that are not feasible for me to get so that I can still get bingo somewhere else on the board! Occasionally one will pop up that I know I can’t get… for me this month I know I most likely won’t be able to get “Author or Character has your name”. There are only so many people named Devon out there! If anyone has a suggestion for that one… let me know! 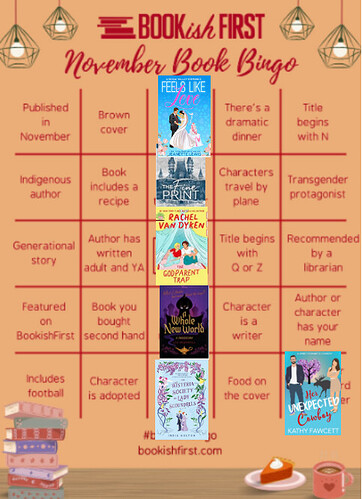 Set during a holiday: Feels Like Love by Jeannette Lewis
Author I am thankful for: The Fine Print by Lauren Asher
Blank: The Godparent Trap by Rachel van Dyke
Home is restored: A Whole New World by Liz Braswell
Historical Romance: The Wisteria Society of Lady Scoundrels by India Holton 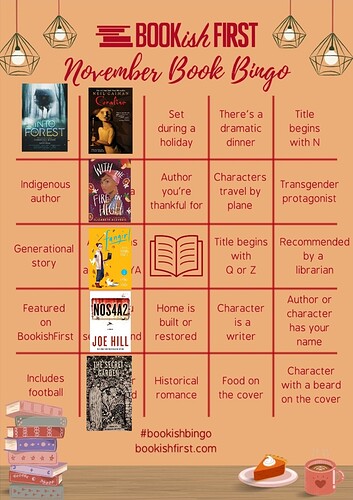 Published in November: A Sliver of Darkness
Brown Cover: A Different Dawn
Set during a holiday: November Road
There’s a dramatic dinner: The Magnolia Palace
Title begins with N: Nightcrawling 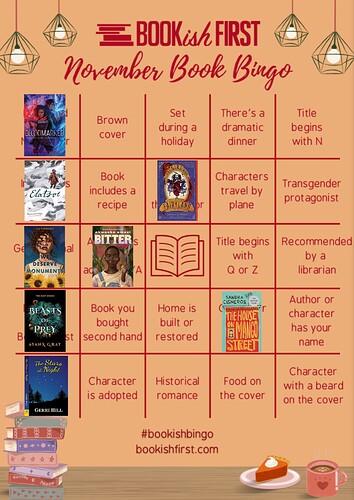 (Books listed left to right, top to bottom)
Published in November: Call Down the Hawk by Maggie Stiefvater (Nov 2019, since the year wasn’t specified)
Brown Cover: Downfall by Angela D. Shelton
Set During a Holiday: Wilds, Warnings, and Little Wolves by C. J. Kavanaugh (Summer holidays)
There’s a Dramatic Dinner: Alternates by Veronica Samek
Title Begins with N: Nice Dragons Finish Last by Rachel Aaron
Indigenous Author: Sisters of the Neversea by Cynthia Leitich Smith
Book Includes a Recipe: Wizard’s Guide to Defensive Baking by T. Kingfisher (I stretched this one a bit, as there’s not a spelled out recipe, but since all the recipes use magic, I think I’m okay)
Author You’re Thankful For: Aru Shah and the Tree of Wishes by Roshani Chokshi
Characters Travel by Plane: TJ Young and the Orishas: The Gatekeeper’s Staff by Antoine Bandele
Transgender Protagonist: Sovereign by April Daniels
Generational Story: The Astonishing Color of After by Emily X. R. Pan
Author has Written Adult and YA: Gallant by V. E. Schwab
Free Space: The Maleficent Seven by Cameron Johnston (because I won’t waste a space when I have books read and spaces to fill)
Title Begins with Q or Z: Quest for the Diamond Sword by Winter Morgan
Recommended by Librarian: The House WItch by Delemhach
Featured on Bookish First: The Extraordinaries by TJ Klune (and I loved the audiobook so much that I immediately bought the rest of the series)
Book You Bought Secondhand: A Court of Silver Flames by Sarah J. Maas (stretched to include a book borrowed from the library since I read exclusively ebooks, and you cannot purchase those secondhand)
Home is Built or Restored: Witchlight by Jessi Zabarsky
Character is a Writer: Spoken by Melanie Weiss
Author/Character has Your Name: Midnight for Charlie Bone by Jenny Nimmo (Author as nickname)
Includes Football: Jake Maddox: Running Back Dreams by Jake Maddox and Sean Tiffany (This one took me the most searching among the books I own to find one that would fit lol)
Character is Adopted: Warriors: Into the Wild by Erin Hunter
Historical Romance: Skylark by Patricia MacLachlan
Food on the Cover: The House Witch 2 by Delemhach (because the first one was just that good)
Character with a Beard on the Cover: The Last Sun by K. D. Edwards 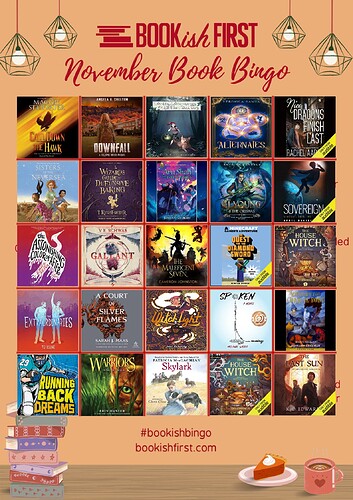 Oooh! I have been trouble finding a book with a transgender protagonist. Everywhere I’ve looked there is an LGBTQ category, but I wasn’t finding any transgender tales! I think I’m going to add Dreadnought by April Daniels to get me that square! Thanks for sharing!

Here’s some more for you:

Not a Sidekick by C.B Lee has a trans character, though not a protagonist. That character IS a protagonist in tye second book of the series though.

There’s also the Tensorate series by Neon Yang. Each novella focuses on a different character, but a continuing story, and takes place in a world where all children use gender-neutral pronouns until they choose what gender they want to be as an adult.

When the Moon was Ours by Anne-Marie McLemore has a trans character and a character who has roses that grow from her wrists.

Ninefox Gambit by Yoon Ha Lee has a protagonist that’s not exactly trans, but is female while also playing host to a male character, and you just kind of have to read it to get it. I will warn you that the worldbuilding, while fantastic, can be above a lot of heads and there’s not much gritty explanation. The author throws you in the deep end with terminology and the reader either goes with it or doesn’t.

The Cemetery Boys by Aiden Thomas - the protagonist is a trans male whose father refuses to admit it and won’t let him take part in the brujo ceremony. Hikinks ensue.

Also by Aiden Thomas, The Sunbearer Trials. I haven’t read this one yet, but I really want to.

Melissa (formerly titled George) by Alex Gino - MC is a middle-school transfemale who is not out, but her school is putting on Charlotte’s Web and she wants to play Charlotte, even though everyone thinks she’s a boy. (There’s also a sequel, Rick, with a cameo from Melissa)

The Witch King and The Fae Keeper by HE Edgmon - the protagonist is a transmale witch who grew up among the fae, who consider witches to be beneath them, and was betrothed to the fae prince. This is an amazing duology that I highly recommend.

The Order of the Pure Moon Reflected on Water by Zen Cho - one of the characters is transmale, but I don’t remember if it was the protagonist or not.

Anna on the Edge by A. J. Sass - a MG book about a young figure skater who knows she’s different but not really why. She meets a transboy while helping teach a skating class one day and begins to explore the language for her identity.

Nothing Ever Happens Here by Sarah Hagger-Holt - mc is a middle school girl who is a middle child. Her father comes out as transfemale and most of the story is about the family adjusting to the new identity. There is some misgendering, but it’s not malicious and is authentic on how those conversations could go.

The Greatest Superpower by Alex Sanchez - mc is a one of twin males whose parents reveal at the beginning that they’re getting divorced because his dad is transfemale and cannot live a lie anymore. A wonderful story about a family navigating a tough situation.

The Pants Project by Cat Clarke - Protagonist is a middle school transmale who hasn’t come out to anyone, and who will be going to a new school with a uniform that says girls must wear skirts. While he tries to figure out a way around the rule, the principal refuses. So, he challenges the validity rule to try and get it changed

I’m sure there are lots more, but these are the ones that I can remember having read in recent months, and I enjoyed them all.